The local development model and commitment to sustainable practices are intended to be transmitted and instilled in schools from the municipality of Santana. Students and teachers are preponderant agents of internalization of a specific life concept.

Every school accepted the suggested challenges in order to be considered “Biosphere Reserve School” embracing the commitment of shared responsibility with the Autonomous Region of Madeira and with UNESCO.

The Biosphere Reserve finds in these organizations favourable conditions to the transmission of important knowledge regarding this theme, which many times interweave with academic subjects. On the other hand, considers children and young people privileged carriers of a new philosophy and the way of life it aims to implement. 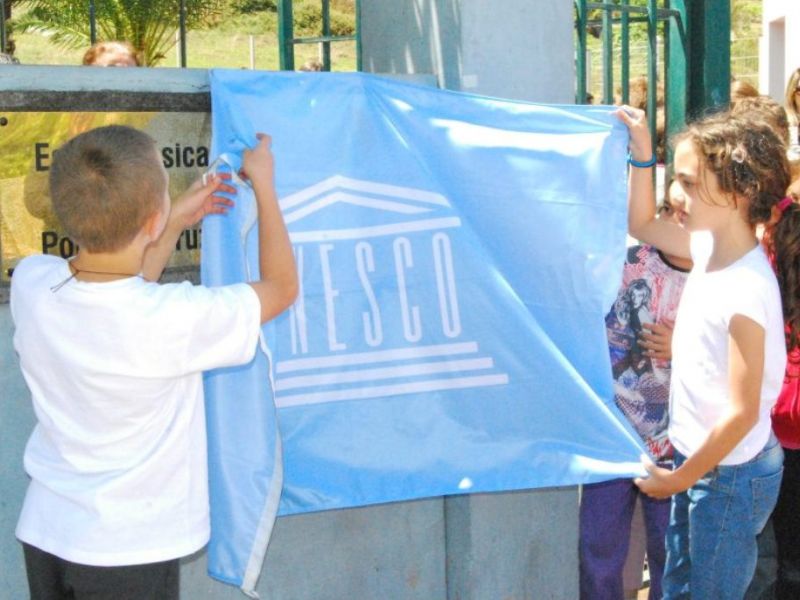 In this educational and pedagogical process everyone - students, teachers, parents, educational community and society in general - wins, for all enjoy the opportunity to learn gradually and slowly themes such as environment, fauna, flora, heritage, agriculture, ethnography, culture, tradition, and many more in a true relationship between Man and Environment.

On the occasion of the application process to World Biosphere Reserve, 2 schools have immediately registered in the UNESCO Associated Schools Network:

The associated schools commit to promote the UNECOS’s ideals preparing students to face the challenges of an ever more complex and interdependent world. These institutions are admitted by national authorities to participate in the System of Associated Schools and to become pilot schools, inspiring other institutions to undertake similar projects.

The participation of the school “EB1/PE/C” from “São Jorge” as UNESCO Associated School made it possible for an inter-territorial cooperation with the purpose to access information and new ideas, to learn with other regions, to stimulate and support innovation, to acquire competencies and improve the transfer of knowledge and know-how.

The associated school was the “B1/JI” from “Vilar do Monte – Vila Cova – Barcelos”. Both schools had a mission to create a guidebook, named “Two days in…”, through which all aspects of the biodiversity of both regions were to be made known to visitors.

The particularity of this activity was that each school had to do the project about the region either than their own, and were to present a guidebook based on experiences attained.